​W. Tom Saul (or old Tom as he was known) was a keen active member, who went on to be one of the best officials and instructors the Surf Life Saving movement had, holding an Examiners Certificate as well as being a District Supervisor. In his days as a competitor Tom was a champion sculler, he won the Australian light weight sculling title in the early 1920’s. 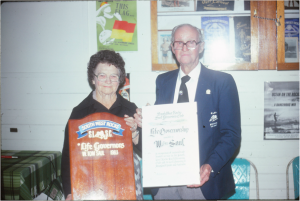