Colin Ball joined the South West Rocks Surf Life Saving Club as a junior. He was a strong swimmer who won many surf races as a junior and cadet. Colin patrolled from 1952, gaining his Bronze Medallion in 1957. He then joined the senior boat crew, along with Peter Busch, Kevin Ball and Athol Lynch. In 1958 this crew were undefeated in carnivals from Urunga to Taree-Old Bar and also won the Branch Championship. 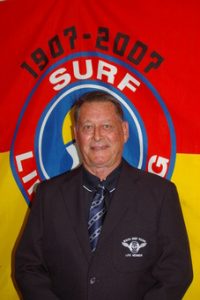